Saving the Lives of Young Teens in Southern California 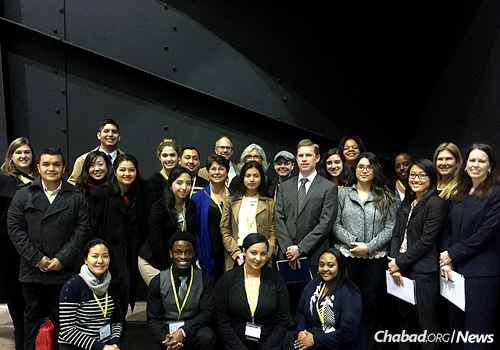 Bringing together parents, youth and the greater community, Saving Lives Camarillo is a substance-abuse awareness organization that began seven years ago in California. The Saving Lives Camarillo Coalition has become a place where community members come together to help youth make wise choices. Its primary efforts are geared to reduce alcohol, drug and prescription-medication abuse by minors.

In 2009, Rabbi Shlomo Cunin, director of Chabad West Coast Headquarters in Los Angeles, approached Rabbi Aryeh Lang, director of the Chabad Jewish Center of Camarillo, Calif., to start the program. It was, in part, derived from Cunin’s work with adult drug rehabilitation as a shaliach for the past 50 years. Instead of rehabilitation, however, Lang’s focus would be on drug and alcohol prevention among community youth.

Those involved with the organization come from all parts of the community, including local law-enforcement and government officials, career professionals, parents, religious leaders, teachers and rotary organizations. All have joined together with the goal of forming a collaborative effort to prevent youth from ages 11 to 17 from using drugs and alcohol.

“The whole community appreciates what we do,” says Lang, executive director of Saving Lives Camarillo, also known as SLC. “We especially have a long-standing and strong relationship with local law enforcement, which began with the former Chief of Police of Camarillo Steve DeCesari—now the assistant sheriff of Ventura County, Calif.—who for years would join us for our monthly coalition meetings at Chabad. 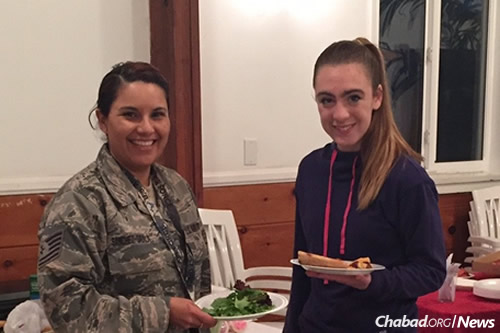 “I saw the commitment to the betterment of our children and the positive role the police department could provide, and agreed to be involved,” states DeCesari. “The police department has continued its involvement in the coalition because we consider it a valuable partnership with community. Rabbi Lang deserves much of the credit for seeing a community concern, obtaining the federal grant and putting together a true coalition of the community to bring these issues to the forefront and education the children and their parents.”

The city’s current chief of police, Cmdr. Monica McGrath, who was appointed last February, also makes it a point to attend coalition meetings and continues local law-enforcement’s trend of activism in this area.

‘Not Just Fun and Games’

In 2010, Saving Lives Camarillo was one of several hundred communities nationwide to receive a federal grant through the Office of National Drug Control Policy and the Substance Abuse and Mental Health Services Organization as part of the “Drug Free Community” program, which provides funds to organizations that work on improving their communities in this field. SLC currently has the grant until 2020. 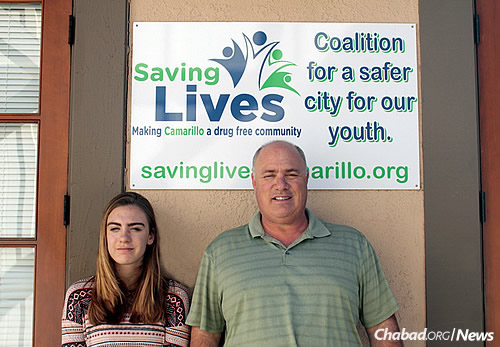 Reilly and her father, Greg Friedman, both part of the Saving Lives Camarillo Coalition

“Saving our kids from drugs and alcohol in youth saves them from having a problem in the future,” said Greg Friedman, who is a part of the coalition with his 14-year-old daughter, Reilly. “SLC helps kids stay away from getting involved with the drug-and-alcohol culture, which has such a detrimental effect on them. I like that it helps kids become aware of the problems that these substances can cause—that it’s not just fun and games, that it can to lead to serious problems. I’m so happy that my daughter has a good perspective about substances, and I hope that she’ll make the right choices.”

Fourteen-year-old Reilly Friedman, who attends coalition meetings and babysits at parenting classes, said: “I used to think that people just used drugs and alcohol for fun, and that it was really stupid. But now, I just think it’s really sad why people do it because of depression or other things that happen in their lives; it’s an escape route. I’ve never really had a desire to use these things.”

Friedman is working towards establishing a substance-free club in her local high school to help spread this message to her peers. 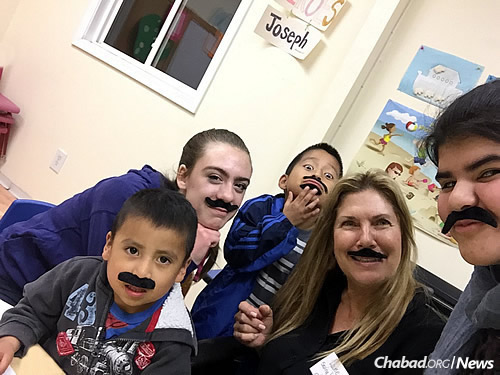 Reilly and Laurie Jackson entertain children of those taking a Spanish parenting class. 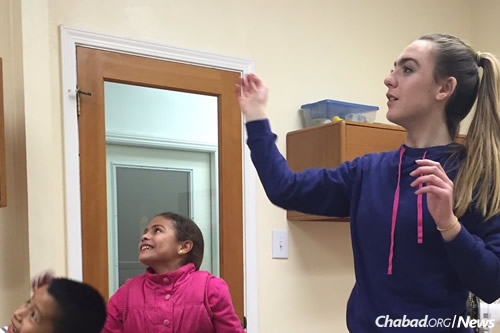 Reilly often babysits so parents can utilize what SLC has to offer. As far as drugs and alcohol go, the teenager says: “I’ve never really had a desire to use these things.”

“We need more coalitions like this because we need to reassure our children that they are important, and that they can have healthier coping options besides using alcohol and drugs,” states Isabel Savala, civil operations specialist of the Counter Drug Task Force, who has been part of SLC since 2013 as chair of the Parent Task Force. “This organization is a hub for both parents and children to come together to support living sober and drug-free. Many people in our society are often misinformed about alcohol and drugs and their effects, and Saving Lives helps dispel those beliefs by providing the most current information both to parents and children alike.”

According to Savala, some of the most effective initiatives have been when a local Ventura County Sherriff’s Deputy came to educate parents about current drug trends in Camarillo; when a doctor spoke about how alcohol and drugs effect the brain; and when a Spanish-speaking class took place to educate parents on how to talk to their children about the dangers of drugs and alcohol. She also saw the success of the “Parents Who Host Lose the Most” campaign, which sends the message to parents who provide alcohol to minors in their home—whether they are present or not—that they can be fined up to $2,500. 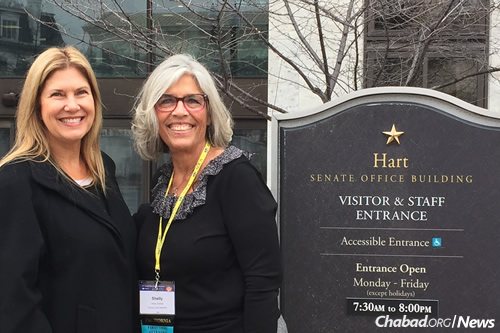 Jackon and Shelly, a volunteer at a recent training session.

“It has been very exciting to see how many students in the Camarillo schools have chosen to be involved with a club that promotes abstinence from alcohol, tobacco and other drugs,” says Laurie Jackson, community coalition coordinator of SLC. “It is so important to educate the students on their choices today and how those choices will affect their tomorrows.

“Many young people live in an environment with drugs and alcohol, and don’t know any differently until we educate them,” she continues. “We need to remind them as often as possible as they navigate some difficult events while they are growing up. Building a child’s self-esteem is a great start. We can make a difference. We need to do more than just say ‘No.’ We need to help them know why and how.

“These clubs are helping students find answers on their own.”

‘A Sense of Purpose’

SLC employs a wide range of tactics to accomplish its goals. The organization distributes surveys and information to send positive messages to young people and to determine if usage has dropped. It also organizes the Saving Lives Youth Task Force to encourage young people stay away from harmful substances and join abstinence clubs at school; hosts “safe and sober” parties after junior and senior proms; holds monthly coalition meetings, and monthly parent and youth task force meetings; works with government to limit access to marijuana; sells T-shirts with messages about safety and sobriety; and offers Spanish-speaking parenting classes at Chabad.

An additional focus is educating teachers and parents to know what types of behaviors young people are engaging in, why these are dangerous and then providing instruction as to how to talk to the under-18 set about them. 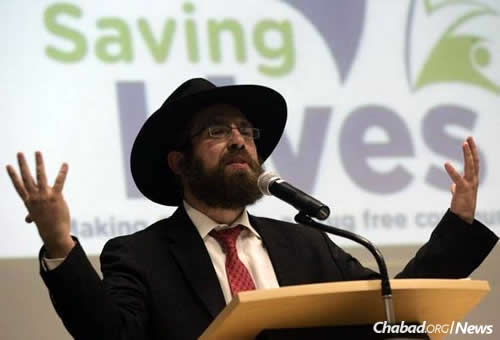 The newest project, according to Lang, is working to establish a moment of silence in the local schools. “This could help give students a greater sense of purpose,” he says. “I’m very excited about this ‘moment of silence’ strategy. Parents say that all of our initiatives have had positive effects on their children and have helped them.”

For Lang, the focus on the community at large—rather than just the Jewish community—is naturally aligned with his role as a Chabad-Lubavitch emissary.

“The Lubavitcher Rebbe [Rabbi Menachem M. Schneerson, of righteous memory] spoke about his followers serving all people, not just the Jewish community, in order to create an ethical community for all people,” explains the rabbi. “There is an obligation for all people to live moral, ethical lives and to make the whole world prepared for Moshiach’s coming. This lines up directly with what we’re doing with Saving Lives Camarillo.”